Prompted partly by increasing mistrust of police officers throughout the country, a video of a lawyer passing through DUI checkpoints after displaying a small flyer went viral earlier this year. The lawyer, Warren Redlich of Florida, created the flyer after becoming frustrated at the number of people he was defending for wrongful DUI charges from checkpoints. He also created the website, fairdui.org, where he posts videos of people successfully using the flyer and provides specialized flyers for each state.

The flyers themselves are fairly simple. In bold letters, they read “I remain silent. No searches. I want my lawyer.” Additional information on compliance with displaying your license, though not legally required, and how the cop should go about issuing a ticket, if necessary, are included in smaller text below, along with the specific laws that entitle you to use this flyer and behave in this way. 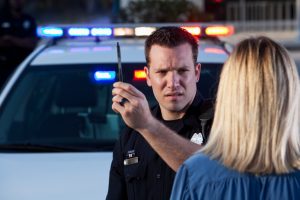 The text of the flyer is accurate. In Missouri, you are not required to lower your window or speak to an officer at a DUI checkpoint. Technically, you are also not required to show an officer any documents, including you license, though Redlich advises drivers to do so as it is common practice for officers to ask for a license. If a driver elects to use one of these flyers, it is critical that they keep their window up for the duration of the interaction. This removes the possibility of the officer stating that they smell alcohol, thereby establishing probable cause and enabling them to search your vehicle or request a breathalyzer test. In Missouri, one tricky point in using these flyers is the possibility that you may need to sign your ticket. There is not state law requiring this, but an officer may request that you do so, and it is best to comply with any orders you receive. The solution, outlined on the flyer, has the officer place the ticket on your window for you to read, while you sign using an app like SignEasy on your phone, enabling you to keep your window up. Drivers are unlikely to be issued tickets at a DUI checkpoint, thus these flyers are better suited for use at checkpoints, rather than a typical traffic stop.

The use of such flyers has met opposition from groups like Mothers Against Drunk Driving (MADD), who have voiced concerns that by creating a tactic to avoid any form of search or interaction with officers at a checkpoint, the Fair DUI flyer may be assisting drunk drivers in avoiding arrest and returning to the roads. Redlich states on his site that these flyers are not intended for intoxicated drivers, but rather for people who are at risk for wrongful DUI arrest (i.e. individuals who had been drinking but are below the legal limit, or those you use prescription medications that might register on a test) and activists concerned with raising awareness of rights violations that commonly occur at such checkpoints.

The Missouri Police Department issued a statement in early 2015 that they are aware of the use of these flyers, and of Redlich’s videos. They stated that they are investigating what officers can and can’t do if a driver uses one of these flyers at a checkpoint. No further follow-up statements have been published.